Deciding to tackle the great unknown next; I choose to read Su Tong’s Binu and the Great wall of China as my third Canongate Challenge.
While long fascinated by China, I know very little about the country, it’s culture or its mythology. I studied a very specific time period for my history leaving certificate (A Level equivalent) and have read Wild Swans and a biography of Mao. Other than that…well I grew up watching Monkey… Fun…but hardly a definitive look at this rich and diverse land.
With the two previous books I’ve read in the Canongate Myth series; I’ve been familiar with the original stories so have read the book first; then refreshed on the myths. This time round; I thought it best to do a little research before getting stuck in.
Background to the myth – one of China’s four great myths
In ancient times (or about 260BC); a childless couple known as the Meng’s lived next door to the Jiang’s, who were also without any offspring. They were friendly towards one another for many years.
One day, Old Man Meng planted a gourd vine along the fence that divided their respective properties. In time, the vine grew, hanging over into the Jiang garden, producing a large gourd.
The couples decided to split the gourd in half and share the fruit.
When they broke it open – to their delight – they found a beautiful little girl inside. Their jubilation gave way to anger as both families decided that they would adopt the child and raise her as their own.
Eventually, neighbours were drafted in to broker a peace between the two. After much negotiation; it was decided that both families would raise the child, who was named Meng Jiang Nu.
Meng Jiang grew up into a stunning young woman. She fell in love and became engaged to Fan Xiliang. Tragedy struck when – on the day of their wedding – soldiers arrived and conscripted Xiliang to build the Great Wall. Labouring on the Wall was known to be brutal with a high mortality rate due to starvation and deprivation. 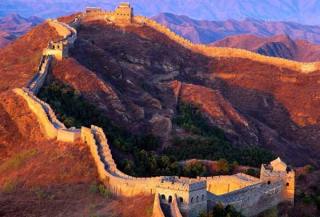 After waiting a year with no word from her husband, Meng Jiang decided to to go to the Wall and check on him. She travelled a vast distance and arrived, only to be told that Xiliang had died. To her disgust; his bones were entombed along with many other unfortunates in the Wall – he hadn’t even been allowed a decent burial. Meng Jiang began to wail and threw herself against the wall, hitting it with her fist. A huge chunk of the Wall cracked open – revealing many skeletons. Unsure of how to continue, Meng Jiang bit her finger, drawing blood. She went to each skeleton in turn, touching them with the bloody tip – praying to the gods for a sign. One of the skeletons absorbed her blood and she knew that she had finally found her beloved. Throwing herself onto the bones; she clung to them; sobbing as though her heart would break all over again.

The angry Emperor of Qin Dynasty rode to the Wall to survey the damage. He was furious up to the moment that he caught sight of Meng. Enchanted by her beauty; he promptly demanded that she marry him. Realising her precarious position – then (as now) it wasn’t wise to show disgust at the actions of powerful men – Meng Jiang agreed on three conditions. Firstly, Xiliang was to be given a grand funeral. Secondly, the Emperor and his court had to go into mourning for his memory. Finally, she wanted to be taken to the sea.
Though the Emperor was reluctant to be seen mourning the loss of a labourer; he agreed. As soon as Meng Joang was taken to the sea, she turned on the Emperor and berated him for his selfish actions. She then threw herself into the sea – in some versions transforming into a silver fish. The Emperor was determined to possess her – even in death – and send his men to find the body. The waves rode up against them. The Dragon King of the Sea and his daughter were so impressed by Meng Jiang’s fidelity that they protected her.
A thousand years after her death; the temple of the Lady Meng Jiang was established at the eastern beginning of the Great Wall where it is maintained even now.
*****
Review
*****SPOILERS*****
*****SPOILERS*****
*****SPOILERS*****

Not sure what to think to be honest. I’ve actually looked up a few reviews online to see what the consensus has determined (which I’ve never done before and shall never do again!) and have ended up more confused than before!
Don’t be fooled by the fairytale title on the cover. Su Tong does not present the myth as I’ve described it above. Rather this is a tale of a lowly and often despised woman, turned into an outcast by her love for her husband. For a short story, I felt emotionally wreaked by the end of it. Though there are whimsical elements – the frog, the weeping from any part of the body bar the eyes and the dream sequences – it also packs quite an effective political punch, highlighting the distance between the King building the Wall and those forced to labour on it.

In the Peach Village where Binu is raised; women are not allowed to shed tears for any reason, leading to some imaginative and inventive alternatives. Binu was in the process of being taught to cry with her hair but her mother passed away, leading to her perpetually weeping. She marries a lowly orphan with whom she is very happy. He is taken away one morning to work on the wall. Binu is horrified that he doesn’t have any winter wear and swop’s all of her worldly possessions for a coat that she decides to bring to him herself.

The rest of the village women who have also lost the men in their lives are threatened by her devotion and treat her horribly. The wise women she visits for advice promise her that she will never return from her journey alive and that no one will make plans for her burial. She heads out without any support and only a reincarnated blind mother in the form of a frog to keep her company. Almost immediately her coat is stolen and she is violently attacked. A little later she is kidnapped, then almost put to death as a sacrifice; then accused of immorality; is nearly raped before finally being found guilty of assisting an assassin.Though she manages to escape; she reaches the wall only to discover that her husband is dead. At this point; she is barely able to move and is unable to communicate effectively with other people. She climbs atop the wall and her constant tears damage the wall. An overseer runs down to the worker below – warning them that the wall is crumbling and the dead rising.

And so her journey, and the story, ends. Though this is a poignant point to finish at – I rather wished that Binu could have had her revenge on the tyrant who’s ambition destroyed so many families.

Although the characters that she meets en route are vibrant and often mystical; I did not find – as many others seem to – that this tale is one of a triumphant honest and enduring human spirit over-coming all evil and woe to achieve her goal. While she does reach the wall, I cannot claim that this is ultimately an uplifting or optimistic tale. While Binu demonstrates fidelity and honour; the true nobility of those who refuse to give up and other inspiring sort of noises; she is repeatedly left disillusioned, at one point to the brink of suicide, at the cruelty demonstrated quite casually by the human race.

I found this to be a heartbreaking tale; the sort that should be absolutely avoided like the plague if you’re in a blue mood. There is no hope, no sense of determination that can make up for the pervasive evil that the world and it’s inhabitants demonstrate time and again. Though this is a translation; the writing is poetic and beautiful. My only complaint is that the dialogue seems somewhat stilted and abrupt.

I think that I would read more of Su Tong…but I’ll leave it a while. Too too sad.