So this is a pre-rant to the main event because I finished South Riding last night and cannot keep it in!
***SPOILERS LOADS AND LOADS OF SPOILERS*** 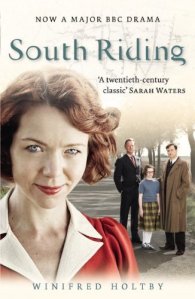 1) Sarah Burton. Oh how I love Sarah Burton. Don’t get me wrong, mega loves and girl-crushes on Anna Maxwell Martin. But WHY did they have it that Sarah had been left broken hearted after the war by her fiancée’s death when actually she had been engaged three times???? This angered me greatly because the TV series gave the impression she’d been some sort of Massive Spinster (not that there is anything wrong with being a Massive Spinster, you understand). The second bloke she dumped for being a racist, the second dumped her for being a feminist and not wanting to give up her work. These are very important developments to Sarah’s character, and should have been at least alluded to.

This leads me nicely on to my next point…

2) They left out all the best lines! ‘I was meant to be a spinster and by God I’m going to spin’, *faints with joy at finally reading a book with a female character I can completely identify with*…’Did you expect to get through life with no word spoken you couldn’t take back, with no failure you couldn’t turn to triumph? Oh my dear you haven’t begun to live yet’ *weeps a little bit at how much more I have to go through before I’m half as good a Sarah, never mind Mrs Beddows*.

3) Errrr where was Cold Harbour exactly? And the great little plot surrounding Lily and her illness? No where! Oh because you have to concentrate on the “love” story don’t you! Cos that’s the only bit that bloody matters! Grrrrrr

4) Don’t Even Get Me Started on Sarah’s Relationship With Joe Astell. Apparently in BBC world women don’t have male friends that are just that, they have to be love interests, don’t they. What makes this even worse was that I was rooting for Joe and Sarah throughout the entire series. Now feel foolish and betrayed.

5) The scene in the music hall with the idiot Southerners that showed how ridiculous class/North-South divides are, and how much those above are the ones to blame, really, and should leave well alone, ie the entire point of the book was completely cut. As were Heyer and Hicks and Sawden, but that’s just point three all over again.

Sorry about that. Had to get that off my chest! Feel better now!